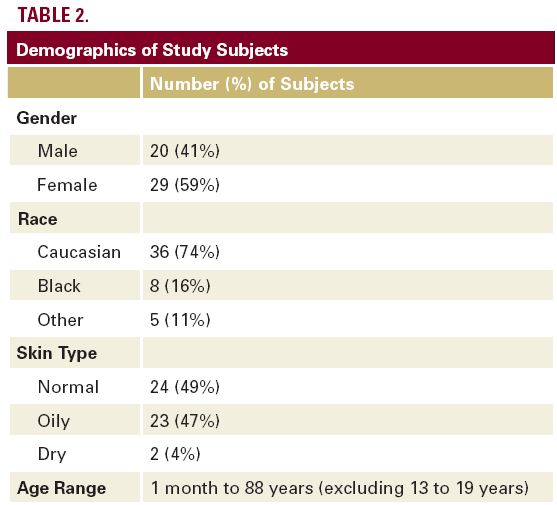 Another clinical trial4 compared the efficacy and safety of tacrolimus 0.1% ointment versus fluticasone propionate 0.005% ointment an upper-end mid potency TC (Class 3) for treatment of atopic dermatitis on the face in adults. Approximately 280 patients with moderate or severe disease with at least 10% involvement of face, head, neck, lower anterior neck-upper chest juncture, and nape were enrolled in each group. Patients used the study medications twice daily for 3 weeks. In the fluticasone group, 79% of patients showed marked or excellent improvement or clearance for the facial region specifically as assessed by Physicians' Global Assessment of clinical response. From a subjective perspective, pruritus was reduced by 72% in the fluticasone ointment group vs 69.5% in the tacrolimus group after 7 days, based on use of a visual analog scale. In the fluticasone ointment group, 15% of patients reported application site AEs that were deemed as related to study medication, most frequently skin burning (2.9%) and pruritus (2.2%), with 3% of subjects withdrawing from the study due to an AE.
Treatment of eyelid dermatitis is especially challenging given concerns regarding increased intraocular pressure associated with TC application to the eyelid region.14 Ocular hypertension has been reported with the use of corticosteroid ophthalmic drops,15 and there have been multiple reports of ocular hypertension related to prolonged durations of TC application to eyelids and/or the periorbital area.16,17 Conversely, in a recently conducted retrospective study looking at the correlation between the use of TCs in atopic dermatitis and the risk of glaucoma and cataracts, 18 there were no diagnoses of glaucoma. Two patients out of 88 had corticosteroid-induced cataracts, which were more likely caused by the use of systemic corticosteroids. It was concluded in this particular article that the application of TCs to the eyelids and periorbital region, even over long periods of time, was

not related to the development of glaucoma or cataracts in this population of patients. Further research is needed in this area; however, it is not likely that any well-designed studies will be completed in the reasonably near future to definitively resolve the issue of TC application and glaucoma risk.
There has been a conspicuous absence of clinical studies that specifically evaluate outcomes related to the treatment of facial contact dermatitis with a TC. In one older study from 1978, the use of hydrocortisone-17-butyrate, a lower end mid-potency TC (Class 5) was evaluated in patients with inflammatory dermatoses of the face and mucosa, including five patients with contact dermatitis. Data from this study are too limited on facial contact dermatitis to draw any definitive conclusions.
There is a wide range of estimates on the incidence of facial psoriasis. For example, van de Kerkoff (2007) reported facial involvement in 17% to 46% of patients with psoriasis. An open-label study evaluated the use of TC therapy for facial and intertriginous psoriasis (N=20). Fluticasone 0.005% ointment was applied twice daily for 2 weeks then once daily for 2 consecutive days every week for 8 more weeks. Results revealed that more than 50% improvement was noted after 2 weeks in all cases of facial and intertriginous psoriasis.19 Another interesting finding was that facial and intertriginous areas responded faster than nonfacial and nonintertriginous areas. There were no reports of skin atrophy or telangiectasias noted over the 10-week duration of the study.

Facial inflammatory and eczematous dermatoses warrant specific considerations when selecting therapy due to several factors, including the visibility of either the eruption or skin tolerability reactions related to treatment, the need to avoid persistent adverse sequelae, and the importance of maintain SC integrity. Unfortunately, there is a lack of clinical trials that specifically look at the evaluate TC therapy for corticosteroid-responsive facial dermatoses. Many trials exclude facial treatment, while others do not adequately carve out subset analyses based on anatomic location. In the few clinical studies that have been conducted, the use of mid-potency TCs for most cases of seborrheic dermatitis, atopic dermatitis, contact der-