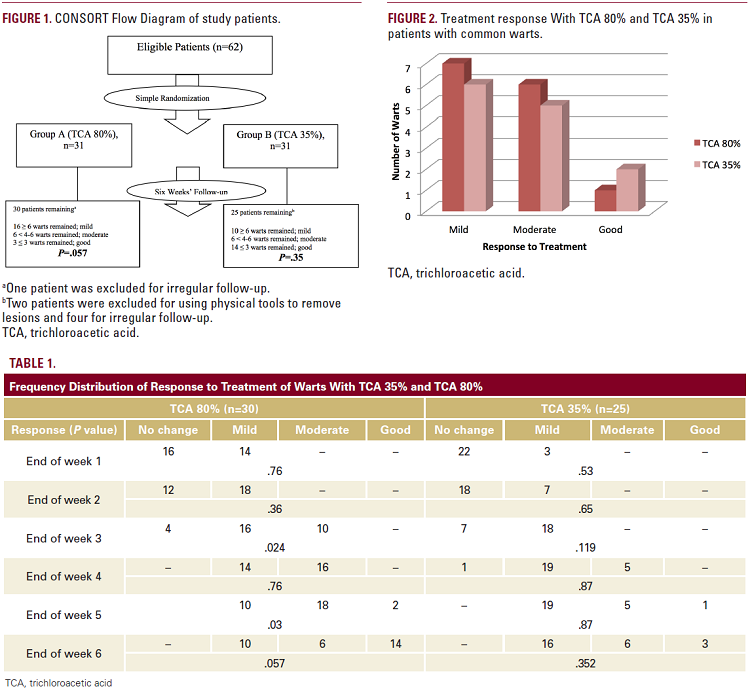 roacetic acid 50% solution acts like phenol solution because of its destructive effects. Trichloroacetic acid works through the destruction of tissue by causing hydrolysis of cellular protein and, finally, cell death. All currently available published studies show that the effectiveness of TCA on genital warts is comparable with cryotherapy, having response rates between 70% and 81%.10,11 A few studies have shown that TCA was effective in treating cervical and anal warts.23-25 The effect of TCA on virus-infected cells is nonspecific. A low concentration of TCA (10%-30%) could be used for superficial peeling, and a higher concentration (50%-90%) for moderate to deep peeling. Trichloroacetic acid could also be helpful for skin diseases
such as xanthelasma palpebrarum and solar lentigines. Adequate application is achieved when the wart and surrounding area turn white. Trichloroacetic acid has the advantage of a complete lack of systemic toxicity; it is not generally absorbed systemically, and its treatment is delivered in a controlled manner to provide limited local destruction, so it can be used during pregnancy.3 Due to its rapid efficacy, TCA should be used with special care around the eyes because white frosting will appear after only a few minutes. The application of TCA is accompanied by a burning sensation that lasts for two to five minutes. Side effects are local pain, crust formation, infection, ulceration, and rarely, scar formation.25