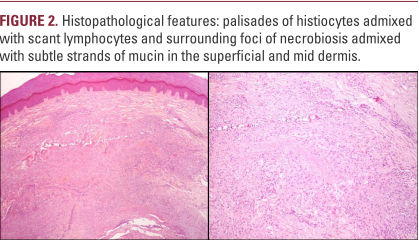 agents. Granulomas are composed predominantly of mononu- clear cell with lymphocytes and macrophages secreting TNF-α and interferon-gamma. Moreover, some investigations have shown that an overexpression of TNF-α by peripheral mono- nuclear lymphocytes and macrophages may play a role in the development of GA.6 Therefore, interfering with TNF-α can lead to breakdown of the granuloma structure.
Adalimumab is a fully human anti-TNF-α monoclonal antibody that binds specifically to soluble and membrane-bound TNF-α, blocking its interaction with p55 and p75 cell surface TNF recep- tors. Adalimumab is currently approved for psoriasis, juvenile rheumatoid arthritis, ankylosing spondylitis, psoriatic arthritis, adult rheumatoid arthritis, and Crohn's disease. Adalimumab, like infliximab, inhibits not only soluble TNF-α but also trans- membrane TNF-a, while etanercept mainly binds soluble TNF-α.7
The ability to adalimumab and infliximab to bind transmem- brane TNF-α may explain why adalimumab and infliximab—but not etanercept—induce apoptosis of monocytes and T-lympho- cytes in Crohn's disease.8
This partially different mechanism of the TNF-α inhibition be- tween etanercept and anti-TNF-α monoclonal antibodies might justify the lower clinical efficacy of etanercept, but not infliximab and adalimumab, in the treatment of granulomatous diseases as Crohn's disease and Wegener's granulomatosis, and the more pronounced propensity of the monoclonal antibodies in comparison with etanercept in reactivation of latent tubercu- losis. It could also explain the treatment failure of 4 patients with GGA treated with etanercept reported by Kreuter et al.9 In fact, several recent reports have demonstrated that infliximab was highly effective in the treatment of other granulomatous skin disorders such as cutaneous sarcoidosis and necrobiosis lipoidica, which are sometimes difficult to treat.
This case is another example that anti-TNF-α inhibitors (mainly the monoclonal antibodies adalimumab and infliximab) be- cause of their slightly different mechanism of action relatively to etanercept, should be considered a therapeutic option in re- fractory GGA.

The authors have no relevant conflicts of interest to disclose