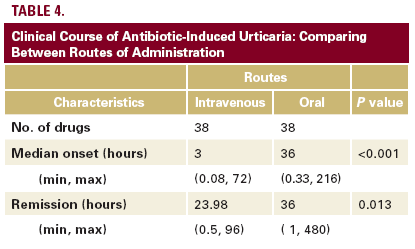 reaction rate significantly increased between the sixth to eighth cycle, with the highest rate occurring at the eighth cycle.34-36 Koshiba et al. reported that incidence of HSRs significantly increased after receiving carboplatin for more than nine cycles.33 Furthermore, they also reported that patients with ovarian carcinoma had higher incidence of HSRs than patients with uterine carcinoma. The exact mechanism of carboplatin hypersensitivity was unclear, but may occur through either IgE-mediated or non-immunologic processes.34 Clinical symptoms ranged from only flushing or itching to anaphylaxis.32 Similarly, our patient developed anaphylaxis at the ninth cycle of carboplatin for ovarian cancer therapy. Sliesoraitis et al. suggested the performance of SPT before the sixth cycle for prevention of carboplatin HSRs.32
Corticosteroid HSRs were uncommon; however, a number of reports have been published.37,38 The reactions were proposed to occur by either immunologic or non-immunologic mechanisms.
In conclusion, antibiotics were the most frequent drugs causing acute urticaria, followed by NSAIDs. Cephalosporins were the most common drugs causing urticaria in Thai patients. Oral NSAIDs had the significantly shortest median time in inducing urticarial reactions. After discontinuing the culprit drugs, the reactions usually disappeared within a few days.

We are grateful to Dr. Chulaluk Komoltri for her kind support.