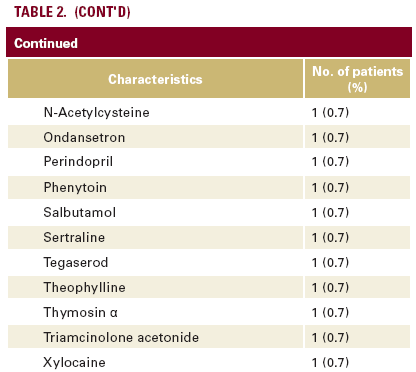 frequent causes.5 In this study, the most common causes were antibiotics (cephalosporins were the most common culprit drugs), followed by NSAIDs and opioids, respectively. Pauvilai et al. also reported that cephalosporins were the most frequent culprit drugs causing urticaria in Thailand.16 These findings may perhaps be due to the increased use of cephalosporins instead of penicillins in Thailand.
The onset of urticaria is more rapid than that of other cutaneous drug reactions. It occurs from within minutes to 36 hours after drug administration.17 Our data showed that NSAIDs significantly had the shortest median time to inducing urticaria after oral drug administration. Even though there was no statistically significant difference, opioids had the longest median time to inducing urticaria after drug ingestion, however, usually not longer than a few days. This data may help physicians to identify the most suspected drugs causing urticaria in patients who are taking multiple drugs. In most cases, the rash disappeared within one to a few days after the culprit drugs were discontinued. Our results supported previous data, which indicated that atopic patients had increased risk of developing NSAID-induced urticaria.18
Gastrointestinal (GI) and respiratory drugs were the common culprit drugs in the miscellaneous group. Proton pump inhibitors (PPIs) caused three out of seven events among the GI drug group. Although PPIs were used extensively in clinical practice, hypersensitivity reactions (HSRs) were rarely reported.19 It was not so easy to diagnose PPI allergies because PPIs were commonly used in combination with other drugs, such as antibiotics or NSAIDs, which were the common causes of drug allergies. Therefore, physicians should be aware that PPIs could be a cause of HSRs. The cross-reactivity among PPIs diagnosed by skin prick testing or oral challenge testing had been reported.20-23 Lobera et al. reported that lansoprazole was a good alternative treatment in omeprazole allergic (type I HSRs) patients when compared with pantoprazole.19
Urticaria is one of the opioids' side effects, and commonly occurs by direct mast cell degranulation24; skin prick testing (SPT) is useless for diagnosis.25 Because most reactions were not a true allergy, the management of mild histamine-related adverse effects involves changing the drug to a different class combined with using antihistamines and/or steroids.24
This study showed four cases of urticaria induced by combination of orphenadrine and acetaminophen. None of them had a history of NSAIDs allergy. The HSRs of muscle relaxants were mostly reported during the perioperative period. Muscle relaxants were involved in 62-75 percent of anaphylaxis during surgery.26-28 Orphenadrine citrate is a derivative of diphenhydramine. It has been used as an analgesic and muscle relaxant.29 Orphenadrine-induced urticaria was rare. As far as we knew, no previous published report existed of orphenadrine-induced urticaria. Acetaminophen is widely used as an analgesic and antipyretic. Acetaminophen HSRs are not uncommon and are mostly associated with aspirin intolerance; however, true allergies are rare.30,31
In carboplatin allergy, the incidence of carboplatin HSRs correlated with increase in the number of treatment cycles.32,33 The