valacyclovir HCL (Valtrex, GlaxoSmithKline, London, UK), ciprofloxacin (Cipro, Bayer, Leverkusen, Germany) and topical steroid therapy. There was little improvement in her condition over the next four weeks and she was referred to our clinic for tertiary evaluation. On examination in our clinic, she had a large patch of reticulated skin on the right malar region measuring 8 x 2.5 cm with a mild amount of edema, and the skin was atrophic, but epithelized (Figure 3b). There was no purulent drainage.
The patient was treated according to our impending necrosis protocol. After cleansing and appropriate skin testing, 40 units of hyaluronidase (Vitrase, ISTA Pharmaceuticals, Irvine, CA) was injected into the indurated areas and a 2% nitroglycerin paste (Nitro-BID, E. Fougera & Co., Melville, NY) was applied. She was started on topical oxygen therapy (Dermacyte Oxygen Concentrate, Oxygen Biotherapeutics, Inc., Durham, NC), aspirin 325 mg daily and instructed to continue the ciprofloxacin. On follow up, she continued to have erythema and induration to the nasolabial fold, but both had improved markedly. An additional dose of 2% nitroglycerin paste was applied, and the patient was instructed to continue using the topical oxygen therapy. The oral medicines were discontinued. Four weeks after beginning our treatment protocol, significant improvement was noted in the affected area, and the patient was optimistic about her outcome (Figure 3c).

Necrosis related to soft tissue filler injections of the nasolabial fold, glabella or other vascular watershed areas is a serious complication, and, while rare, all physicians should be aware of a treatment protocol. A possible cause of the necrosis is intravascular injection of the filler product and resulting vascular occlusion, which would result in an immediate blanching along a recognizable vascular pattern. This should be obvious to the injecting physician. One could argue that aspirating before injecting could be helpful to indentifying intravascular cannulization. However, it is technically difficult to aspirate adequately with the current FDA cosmetically approved soft tissue filler products in the U.S. In an attempt to reduce immediate intravascular embolus,it has been our practice to inject slowly anterograde and to keep the needle constantly mobile. We also avoid injection in the immediate vicinity of large named facial vessels and premix our product with 0.3 ml of lidocaine prior to injecting, which decreases the viscosity of the product and theoretically reduces 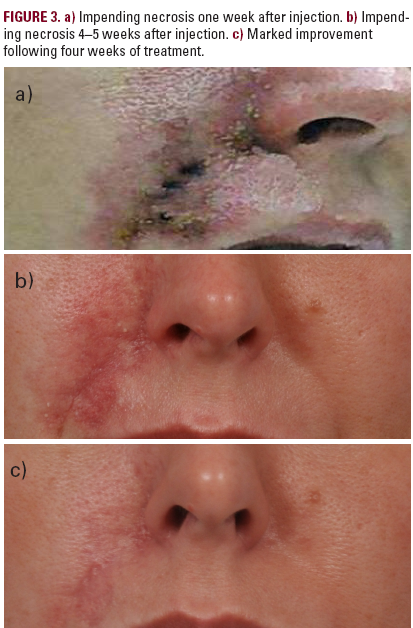 risk for occlusion. Additionally, the recent adoption of blunt tip cannulas (SoftFil, Soft Medical Aesthetics, Paris, France) for subdermal injections significantly reduces post-treatment ecchymoses and likely reduces the risk for intravascular cannulization.
However, most of the impending necrosis that we have treated is likely due to either pressure necrosis secondary to local edema or to occlusion of adjacent vasculature secondary to the hydrophilic properties of the product. These mechanisms explain the delayed onset reported.
The senior author has instituted a modified version of a previously published protocol to treat impending necrosis subsequent to soft tissue filler injection with efficacious results (Table 1).14 Upon first recognition of vascular compromise, as evident by blanching followed by a dusky or purple discoloration of the area, injection should be immediately discontinued.4 Regardless of the filler, 10-30 units of hyaluronidase (Vitrase, ISTA Pharmaceuticals, Irvine,CA) diluted 1:1 with saline per 2x2 cm area are injected into the area of impending necrosis. Skin testing is recommended