(I2), hypoiodic acid (HOI), iodine cation ([H2OI]+), triiodide ion (I3-), iodide ion (I-), hypoiodite ion (OI-) and iodate ion (IO3-). Elemental iodine, hypoiodic acid and iodine cation account for the majority of the antimicrobial activity of PVP-I. Together, they are highly viricidal, bactericidal, fungicidal, cysticidal, protozoacidal and moderately sporicidal. The microbicidal mechanism of action involves iodination and oxidation of various microbial chemical structures, which results in rapid microbial killing.2 A 10% PVP-I solution contains only 0.0001% free iodine. The gross majority of the iodine is complexed to PVP and therefore unavailable for antimicrobial activity. However, as free iodine is consumed in microbicidal activity, additional iodine is continually released from PVP, thus maintaining a constant concentration of free iodine.1,3 Free iodine is a well known irritant, and thus the low concentration of free iodine in PVP-I contributes to its favorable side effect profile as compared with other iodine preparations. For example, tincture of iodine contains 2% free iodine and causes a greater degree and frequency of irritant reactions.2,4
Chemical burn is a rare but recognized adverse effect of PVPI with 34 previously reported individual cases.3,5-12 The injury develops when PVP-I is not allowed to adequately dry, pools beneath a dependent body part during surgery, or is placed under an occlusive device. Examples from the literature include a 76-year-old man who developed a burn on his upper back after thyroid surgery,3 a 38-year-old woman who developed a burn from her mid-back to buttocks after a laparoscopic gynecologic procedure,6 a 24-year-old male undergoing a flexor tendon repair who developed a burn on his arm where PVP-I solution had soaked into the wool padding beneath a tourniquet,5 a 45-yearold patient requiring epidural anesthesia who developed a burn at the epidural cannula site where gauze soaked in PVP-I was placed under a waterproof dressing,5 and two critically-ill patients who developed burns on their faces in areas where the cotton-tape securing the endotracheal tube was contaminated with PVP-I.12 The offending agent was either PVP-I 10% solution or PVP-I in alcohol. Table 1 lists the common characteristics of PVP-I burns. While patients typically heal without significant scarring, the burn subjects the patient to unnecessary pain, prolongs hospitalization, increases the risk for infection and can jeopardize a healthy doctor-patient relationship.5 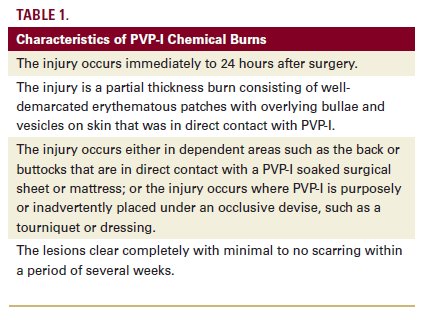 The proposed mechanism of injury involves the chemical irritant iodine coupled with occlusion, maceration, pressure and friction. The injury may be exacerbated by the concomitant use of alcohol washings which de-esterify the skin thereby decreasing the epidermal barrier.5,13 The injury is largely regarded to be an irritant contact dermatitis and not an immunologically-mediated allergic reaction.3,14-17 In cases where allergic sensitization is suspected, patch testing can be considered. However, several studies have demonstrated that PVP-I in solution and under occlusion is intrinsically irritating which complicates patchtesting. 3,7,17 In one such study, 17,500 consecutive patients were patch tested with a 10% PVP-I solution diluted 10 times in water. Of the initial 500 patients, 14 showed a positive patch test, but when these 14 patients were subsequently subjected to a repeated open application test (ROAT), only two patients had a positive ROAT. Thus the authors concluded that the majority of the initial positive patch tests were actually false positives due to irritation and not sensitization. In a similar study,3 19 patients with a history of a rash from PVP-I and a group of healthy controls were subjected to both a patch test and a subsequent ROAT with 10% PVP-I. All of the patients and healthy controls developed a significant reaction with the patch test, yet no subjects developed a reaction with the ROAT, thus again confirming that the injury is most likely irritation and not allergy. While other authors have reported a significant amount of allergic contact dermatitis from PVP-I,18 these authors did not include a ROAT trial and thereby failed to exclude false positive irritant reactions, as argued by Lachapelle.17 Despite these caveats, there are cases in the literature where true contact sensitization appears likely.19,20 When patch testing is indicated, several recommendations have been proposed to exclude false positive irritant reactions. These include using a ROAT as previously described, using a dilute PVP-I preparation14 and using either dried PVP-I15 or PVP-I in a gel polymer16 instead of PVP-I in an aqueous solution.