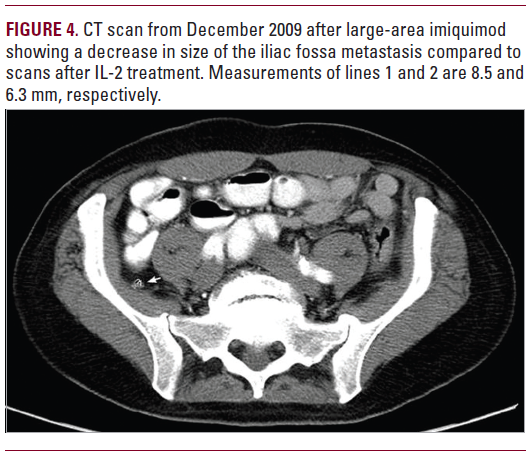 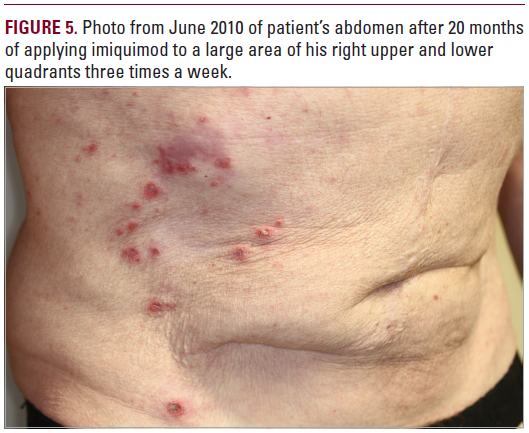 skin overlying the metastatic lesions. After August 2009 he continued imiquimod as monotherapy to a larger area, including both the anterior pelvis and the right upper quadrant. Surprisingly, his metastatic lesions regressed, and one completely disappeared. It is possible that application of imiquimod to a larger area could have had an effect on the metastatic lesions.
While use of imiquimod for internal melanoma metastases has not been reported, there is evidence that imiquimod is effective for off-label treatment of cutaneous melanoma. A patient presenting with multiple cutaneous and subcutaneous me
tastases on the scalp showed complete regression of lesions after 17 months of topical imiquimod therapy.12 Another study looked at seven patients with lentigo melanoma treated with topical imiquimod for 12 weeks; at 19 months follow-up, six of the seven patients showed both clinical and histologic resolution. 13 Of note, imiquimod is approved for treatment of actinic keratoses, superficial basal cell carcinomas, and external genital warts. Actinic keratoses are treated twice a day for no more than 16 weeks, superficial basal cell carcinomas are treated five times a week for six weeks, and genital warts are treated three times a week for no more than 16 weeks. The cream is to be applied in a thin layer and left on for eight hours before washing it off.14 Use of imiquimod in cutaneous melanoma is off-label and not supported by the manufacturers. The patient we report followed an alternating two week application schedule that used significantly more than the amount recommended for superficial basal cell carcinoma. He used two full packets, one on the abdomen and one on the pelvis, three times per week, for a total of six packets in the first week. This typically caused sufficient discomfort that he would use half of a packet on each area three times per week, for a total of three packets in the second week. He used this alternating schedule for nearly the entire treatment course, and continues to do so.
In contrast to the multiple common and potentially serious side effects of systemic chemotherapy, the only common adverse effect of topical imiquimod is skin breakdown at the application site.3 This patient experienced some skin breakdown, but persisted with treatment. Although imiquimod has only been indicated for the use of cutaneous diseases, this report supports further exploration of the potential for topical imiquimod or other topical therapies to play a role in treating systemic disease. This may be useful for those who cannot tolerate chemotherapy.

None of the authors have any relevant conflicts of interest, financial or otherwise.