In October 2008 the patient restarted topical imiquimod, this time to his entire right abdomen. PET and CT scans in January 2009 showed partial resolution of the previously metabolically active foci in the liver, and a decrease in size of the right iliac fossa metastasis. At the time of his January 2009 scans, the patient had been applying the imiquimod cream for approximately six months: three months before his IL-2 treatment, and three months afterward. Encouraged by the January 2009 scans, he continued to apply topical imiquimod cream to his abdomen and pelvis three times per week. Scans from September 2009 showed complete resolution of his hepatic lesions and a continued decrease in the size of the right iliac fossa metastasis.
The patient’s most recent CT scans from December 2009 showed no evidence of a hepatic mass and no continued growth of the iliac fossa mass (Figures 3 and 4). Visual examination of the patient’s abdomen and pelvic region in March 2010 showed multiple red pustules approximately 8 mm in diameter concentrated in the two regions he had been applying the imiquimod cream (Figure 5). This was the only adverse effect of the imiquimod treatment according to the patient.

Melanoma is a very aggressive and often fatal skin cancer, and its incidence is rising worldwide. In the United States, the incidence rate is 10–25 per 100,000.5 Risk factors for the development of melanoma include having a large number of nevi (especially dysplastic nevi), UV radiation and sun exposure, immunosuppression, previous occurrence of melanoma and having a family history of melanoma.7–8 The five-year survival rate for patients with distant metastases is only 10 percent with a median survival of six to 12 months.6
Spontaneous regression of melanoma metastases is extremely rare. Spontaneous regression is defined as a complete or partial disappearance of a metastatic lesion in the absence of therapy —or in the presence of therapy that is considered inadequate to yield significant tumor response. The incidence of spontaneous regression of malignant melanoma is approximately one in 400 patients presenting with metastatic disease.9
This report describes a patient with stage IV melanoma, with metastases to the stomach, liver, and iliac fossa. For patients with stage IV melanoma, systemic chemotherapy is indicated, despite its limited success.10 The choices for single-agent chemotherapy include cytotoxic agents and cytokines.11 The above patient received a single round of IL-2 monotherapy, which has a response rate of 16–21.6 percent.6 Due to this patient’s development of interleukin-induced myocarditis and the slow progression of his lesions on multiple PET and CT scans, it was decided that he would not undergo any more chemotherapy at that time. On his own, the patient had started applying topical imiquimod three times per week to a small area of abdominal 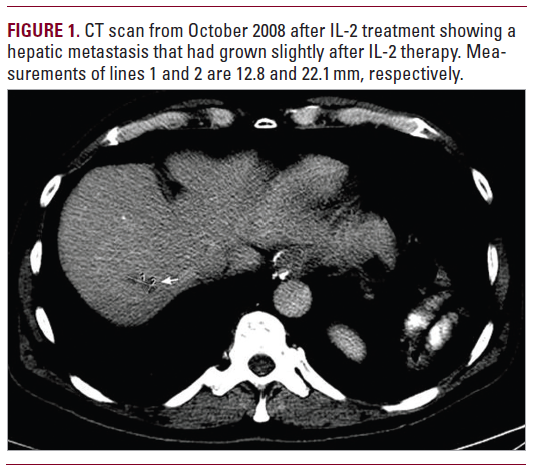 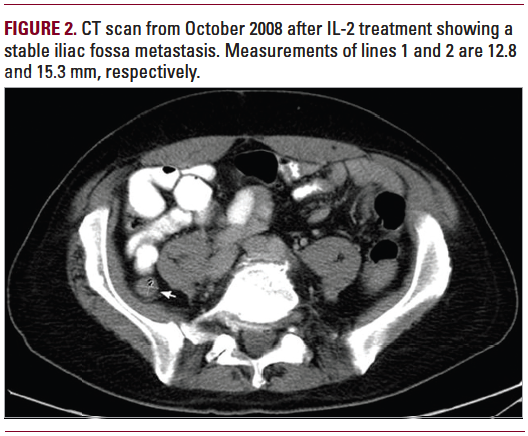 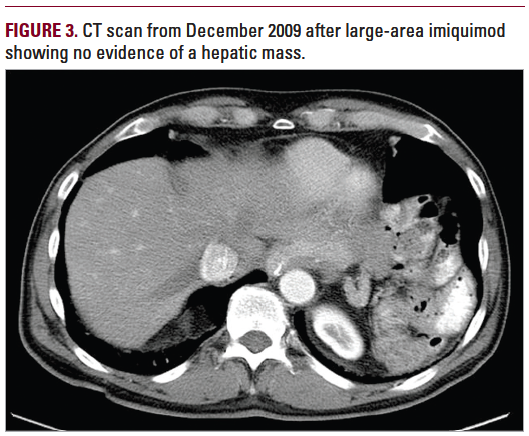