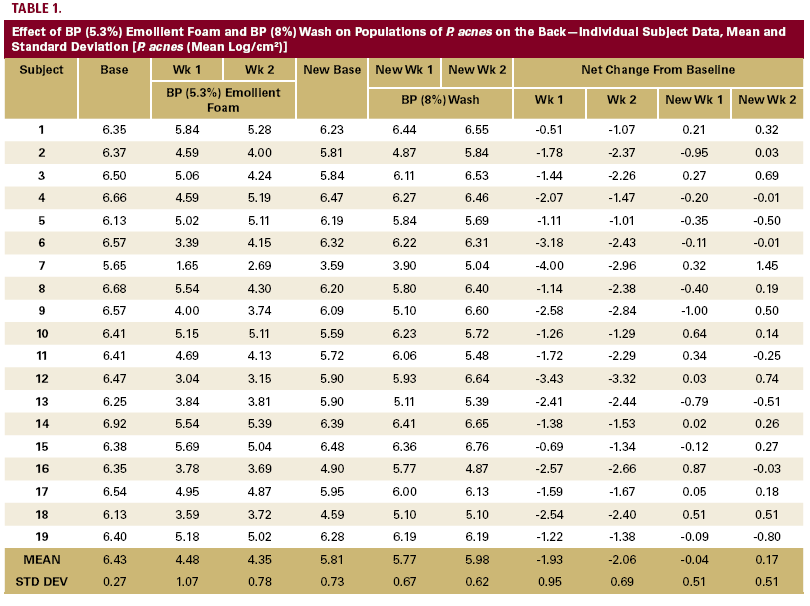 BP is frequently used as either a “wash off” or “leave on” treatment, both alone or in combination with clindamycin. The primary mode of action of this non-antibiotic antimicrobial agent is the reduction of the P. acnes, the organism primarily responsible for generating inflammatory lesions through. Numerous studies with various formulations have looked at the in vivo antimicrobial effect on P. acnes populations of BP and its combinations. “Leave on” products typically produce a 2.0 logarithm colony reduction on the face within two weeks, while one BP (6%) wash formulation produced a 1.5 log reduction after two weeks.
Interestingly, there are no in vivo studies measuring antimicrobial effects on the trunk for any formulation of BP or antibiotics such as erythromycin or clindamycin. In this study, the in vivo antimicrobial effects of a “leave on” BP (5.3%) emollient foam formulation and BP (8%) wash formulation were compared. A cross over design permitted comparison of P. acnes reduction for both agents in each subject and eliminated any variation of penetration into sebaceous follicles that might occur if parallel groups had been used.
The “leave on” BP (5.3%) emollient foam produced a 2 log colony reduction after two weeks of treatment. Interestingly, there was no reduction in P. acnes on the trunk with the BP 8% wash. This is very surprising in view of the finding of a 1 log reduction on the face. The “leave on” product was applied under supervision in a laboratory setting while the wash product had to be used at home. Subjects were instructed to thoroughly wash the areas that had been treated with the foam. The lack of response in all subjects as opposed to response in some and failure in others argues against poor adherence. It is unlikely that an entire panel would have failed to adhere to instructions. However,