cal determinations. In addition, the study evaluated adverse events and tolerability associated with the two preparations used on the back.

This five-week, open-label single-center study enrolled 20 healthy adults (≥18 years old) who were free of acne but had high P. acnes populations on their backs (at least 10,000 colonies per cm2). Subjects were screened to ensure that none were using any form of topical or systemic antibiotics within four weeks prior to enrollment. They were instructed not to use any antimicrobial topical products (e.g., soaps, medicated shampoos, acne preparations).
Key inclusion criteria included: healthy, adult male and/or female volunteers 18 years of age and older; all females must be using an acceptable method of contraception; subjects willing to refrain from using antimicrobial topical products (shampoos, soaps, acne preparations). Key exclusion criteria included: any volunteer who exhibited any skin disorders of an acute or chronic nature including psoriasis, eczema, etc.; use of topical or systemic antibiotics within the previous four weeks; females who were pregnant, planning a pregnancy or breastfeeding.
Each subject was treated once daily with BP (5.3%) emollient foam during the first two weeks at the study center under supervision by a technician on weekdays and unsupervised at home over the weekends. The area treated was from just below the scapulae to the shoulders. A cherry tomato-sized amount of foam was spread over this area. Subjects received no treatment in week 3 to allow bacterial re-growth. Subjects were subsequently instructed to apply BP (8%) wash to the same area treated with the foam for two weeks when showering, referring to the package insert (i.e., wash until a full lather develops, rinse and pat dry using once daily the first week and twice daily the second week if more than one shower a day is needed). No specific instructions regarding the amount of wash product were given.
Quantitative bacteriologic cultures using a modified Williamson and Kligman16,17 scrub technique were obtained from the upper back at baseline and weeks 1, 2, 4, 5 and 6. Colony forming units (CFU) of P. acnes were counted at a dilution that contained between 10 and 100 CFU. Total densities of P. acnes (log10 CFU per cm2) were calculated and reported.
Cutaneous tolerability assessments were carried out during the first two weeks and at the weekly visits during the last two weeks of the study. Local signs and symptoms (scaling, dryness, erythema, itching and stinging) were assessed on a four point scale where 0=none, 1=mild, 2=moderate and 3=severe.

Nineteen out of 20 subjects were evaluable.

No serious adverse events were reported with either treatment. No erythema, dryness, scaling or burning were observed or re- 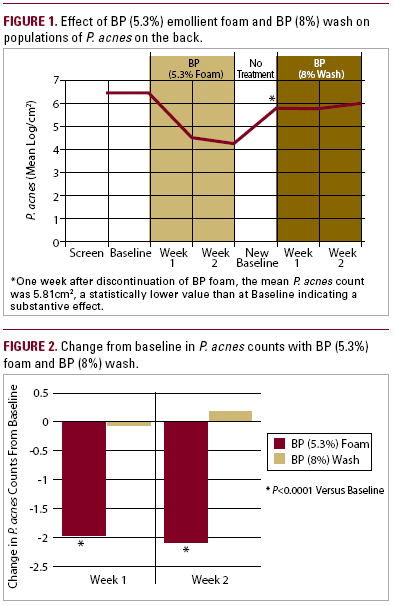