In addition to shiitake (Lentinus edodes) and reishi (Ganoderma lucidum) mushrooms, which have anti-irritant and antioxidant properties,3 Cordyceps taii and Sparassi crispa show promise for the treatment of photoaging. Cordyceps species have been utilized for years in traditional Chinese medicine. In vitro studies have shown that aqueous extracts (freeze-dried samples) of Cordyceps sinensis and militaris exhibit antioxidant properties. 4 Xiao et al conducted an in vivo study on D-galactose aged mice, to evaluate the ability of Cordycepts taii extracts to reduce oxidative stress and enhance endogenous antioxidant production. Polysaccharides from C. taii promoted endogenous antioxidant activity while also scavenging free radicals and inhibiting lipid peroxidation.5
Veratric acid is phenolic acid found in Sparassis crispa. After exposing HaCat keratinocytes to UVB, some cells were treated with veratric acid and the remaining cells received no post- UV treatment. Veratric acid-treated cells exhibited a reduced amount of DNA damage, a decreased number of cyclobutane pyrimidine dimers, and prevention of UVB-mediated apoptosis. 6 Shin et al also conducted a UVB erythema test on 18 human subjects who applied veratric acid or the vehicle to their forearms for 30 minutes prior to exposure to 1.5 MED. Erythema was measured at 0, 1, 2, 3, and 6 days after exposure. Participants who applied veratric acid displayed significantly reduced (P < 0.01) UV-induced erythema as compared to the vehicle-treated control group. No allergic or irritant reactions were noted after application of veratric acid to the skin.6

Feverfew (Tanacetum parthenium) is a member of the Asteraceae family, which also includes daisies and chrysanthemums. Originally used as a fever reducer, it is known to have anti-inflammatory, anti-irritant, and antioxidant properties.3 It contains volatile oils, flavonoids, and sesquiterpene lactones,7 including parthenolide, a potent contact sensitizer. To avoid the complications associated with parthenolide, parthenolide-depleted feverfew extracts have been developed.
Parthenolide-depleted feverfew is believed to enhance DNA repair activity via activation of a PI3K-dependent Nrf2/ARE pathway. Phosphatidylinositol-3-kinase (PI3K) is a signaling kinase that induces Nrf2 to bind to the antioxidant response element (ARE) promoter. Among many functions, the ARE promoter ultimately regulates the transcription of antioxidant proteins. Parthenolide-depleted feverfew extract was shown to significantly reduce both UVA and UVB-induced DNA damage of human keratinocyte cells after UV exposure, thus reducing the degree of oxidative damage.8
In a randomized double-blinded study of 12 participants, topical formulations of 1% parthenolide-depleted feverfew and placebo were applied to the skin of the back twice daily for two days, irradiated with UVB at 0.5, 1.0, and 1.5 MED, and then re-applied for two days. Erythema was evaluated at 24 and 48 hours postirradiation. The feverfew-treated skin showed a statistically significant (P < 0.05) decrease in erythema at 24 and 48 hours post-irradiation as assessed by clinical grading and confirmed by chromameter readings.9 Figure 1 demonstrates a subject who used a topical feverfew product on her face for 3 weeks. The significant reduction in erythema is clearly evident.10 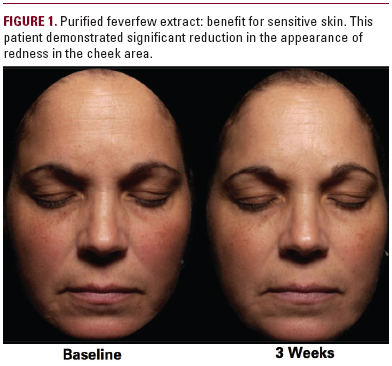